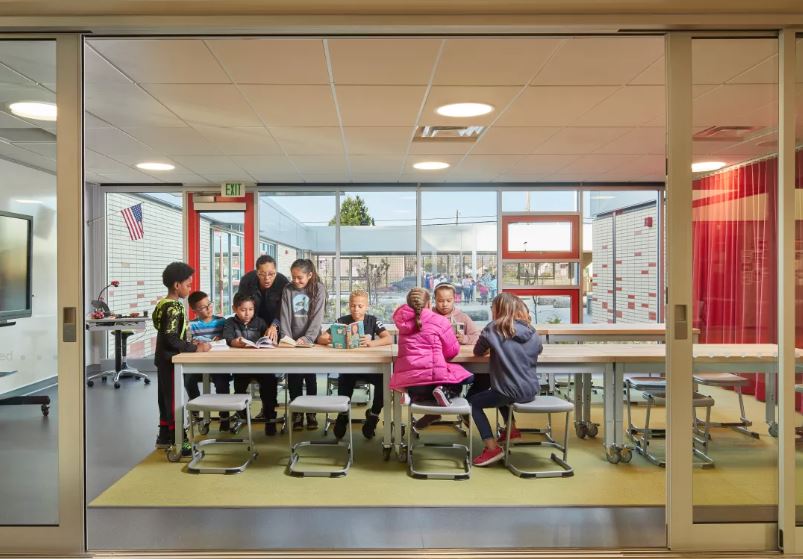 Amid a national conversation, architects put their unique skill set to work.

How well can anyone plan for the chaos and violence of a school shooting?

In American public schools, it’s now considered a best practice to have a written protocol in place for how to proceed if a shooter opens fire on school grounds or inside school walls; nearly 90 percent of schools have them, according to the Centers for Disease Control and Prevention. In addition, 70 percent of schools run active-shooter drills with their students.

But for architects who design schools, the planning starts much earlier, before the first brick is laid. Strategic thinking about how to keep students safe is now baked into the design process of every school and learning institution— with the added mandate of preventing a school from looking or feeling too similar to a prison.

According to a Northeastern University study, school shootings are not statistically more common now than in the past. Four times the number of children were killed by guns in schools in the early 1990s than today. Nevertheless, in the wake of the shooting at Florida’s Marjory Stoneman Douglas High School in February 2018, in which 17 people were fatally shot and 17 more injured, as well as a shooting at Santa Fe High School in Texas in May, the conversation around preventing equally high-profile violent incidents in the future has reached a crescendo. Architects are preparing themselves to see this reflected in the participatory design process moving forward.

“For communities that don’t yet have that emotional distress in relation to a shooting scenario, it probably doesn’t come up as often,” says Jenine Kotob, Assoc. AIA, who designs schools at Quinn Evans Architects in Washington, D.C., and is an active member of AIA’s Committee on Architecture for Education (CAE). “So it [has] kind of been up to [the architects] to work with the client at the highest level to talk about it and figure it out. But I definitely think, moving forward, that’s going to be completely different.”

When schools put stronger security measures in place with the intended outcome of keeping students safe, they can have unintentional adverse effects.

“In a daily experience, it really impacts the students and how they feel about themselves, and it kind of perpetuates the school-to-prison pipeline issue,” Kotob says. That pipeline, in turn, perpetuates prejudices as well as harmful paranoia and anxiety.

And that’s why architects make it their job to pursue solutions that are all but invisible.

In working on a redesign of the Marie H. Reed Center, an elementary school and community hub in the Adams Morgan neighborhood of Washington, D.C., Kotob says that Quinn Evans took a layered approach: planning for the worst-case scenario of a violent mass shooting incident but also accounting for the more commonplace security concerns that students and teachers were likely to encounter, such as bullying and sexual harassment. Kotob and her colleagues didn’t want to provide too many dark, out-of-the-way spaces, but they did want to include hiding spaces and escape routes in case of an emergency.

Karina Ruiz, AIA, the 2019 CAE chair, has over two decades of experience in public school design in the Portland, Oregon, area. She says that an essential part of the design process is thinking strategically about where to place doors, windows, and wheelchair ramps in proximity to one another.

“As we’re dealing with active-shooter planning and prevention of mass tragedies, part of that has to do with just time for first responders to arrive,” she says. “You’re building these layers at the front entry where you’re slowing people down and putting obstacles in their paths.”

"You're building these layers at the front entry where you're slowing people down and putting obstacles in their paths." - Karina Ruiz, AIA

Unencumbered visibility for administrators who work near the front entrance is another key tool in buying time. Kotob and her team employed bullet-resistant glazing in the main lobby space, near the school’s front entrance, and equipped the glass throughout the rest of the building with breakage sensors. At the classroom level, glazing around entryways is kept to a minimum.

“That was strategic, so we would allow for the entire class to tuck away in a blind spot in the room,” Kotob says. “So if an active shooter is walking down the hall, they peek through a window and they see,  ‘Oh, there’s nobody inside so let me keep going into the next room.’”

Following the shooting at Santa Fe High School, where 10 people were killed, Texas’ lieutenant governor was ridiculed for suggesting that the attack might have been avoided if students had only one available entrance and exit. While it’s a strategy that many school designers already utilize, Kotob says, it’s incorrect to cast it as an infallible solution.

“We can’t make those kinds of generalized statements. There is no, ‘Well, we can just wipe away the issue if this one thing was resolved,’” Kotob says. “While we do try to design for the most secure solution—which, in this case, at Marie Reed, is one door that the public can enter through, especially families and students—we still don’t know if teachers on the inside are going to be propping doors open to let kids in and out.” Using one entrance and exit also creates a bottleneck effect, making students particularly vulnerable targets during crowded arrival and dismissal times.

In the process of working on security strategies for schools, architects also recognize the importance of prioritizing space for school support and mental health services.

“Simple things like moving a counseling wing and putting those where students are located—near commons, near libraries—and then making them transparent,” says Ruiz. “Design can be an engager in prophecies that allow us to build softer schools—places where kids don’t feel disenfranchised and lost in the first place.”

Architects stress that design isn’t going to singlehandedly solve the problem of students encountering danger at school—or perpetrating it. Pamela Moran, superintendent of Albemarle County Public Schools in Virginia, says it’s important for K–12 schools to put an emphasis on addressing social-emotional learning, and for staff to be trained in looking out for warning signs of declining mental health in students.

“I think you have to take a multifaceted approach,” Moran says. “How do kids develop that personal social-emotional competency? We want to make sure we have kids with as many skills as possible to cope with the things that might turn into anger towards themselves or others.”

Kotob also emphasizes that design can only be one piece of a larger whole. “There is a pie, and the pie is comprised of legislation, policy, education, awareness, and technology—and the architecture is one small piece of it,” she says.

Successful school design ultimately hinges on centering the needs of those whom the school is intended to serve.

“Working with students specifically so that they can be co-designers with us, rather than recipients of a design that is imposed on them, is really important,” Ruiz says.

For parents of public school students, sending their children to school comes with a sense of acceptance that there’s only so much that they—or anyone—can do when it comes to keeping their students safe.

“If someone really wants to cause harm, they’re going to find a way no matter what you do, unfortunately,” says Albemarle County Public Schools Director of Learning Technologies Jamie Foreman, who has four children ranging from preschool through fifth grade in the school system. “That’s how I think about it as a parent.”

As architects continue to innovate new ways to design for effective security measures, Ruiz emphasizes that conversations around designing safer schools should always recognize the vital role that public schools play in their communities.

“We, as designers, are uniquely situated—through our training and through our work experience—to bring a myriad of people together from different backgrounds, with different perspectives, to solve complicated problems in beautiful and elegant ways,” she says.

Katherine Flynn is a writer/editor at AIA focusing on industry trends and emerging ideas.

Sign the "power of design" on school safety petition that will be sent to elected officials across the country.

By Katherine Flynn, June 20, 2018 - via AIA.org
Original article can be found at: https://www.aia.org/articles/201346-architects-prioritize-design-as-a-school-se