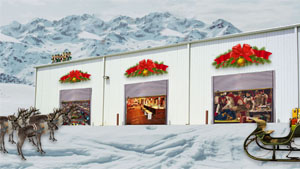 This time of year, no team is busier than the North Pole elves. As a major leader in toy manufacturing, the elf’s North Pole division works in one of the toughest climates imaginable. Recently, the elves inquired if something could be done to combat the swift gust of arctic air flowing into the facility. The elves’ boss, Mr. Kris Kringle, head of operations at Santa Claus, Inc., installed high-performance roll up doors with energy efficient garage door insulation throughout the facility.  The change has led to increased productivity and overall morale improvement. 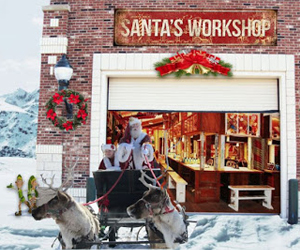 What initially started as a search for rolling doors with the most energy efficient garage door insulation, led the team at Santa, Inc., to discover the truth that, for true thermal door protection and insulated garage door cost, one must consider air leakage. The best thermally insulated doors provide little protection if air can simply go around the outside of it. The team discovered that high-performance overhead doors significantly improve energy efficiency by decreasing the air infiltration by 94% by implementing a perimeter seal. Installing high-performance doors with energy efficient garage door insulation along with the perimeter seal helped Santa, Inc. achieve 38 credit points in five LEED categories. As a leader in green technology, led by their patented reindeer-driven aerospace division, they were very pleased with the insulated coiling doors installed also complied with the latest IECC and ASHRAE air leakage standards. 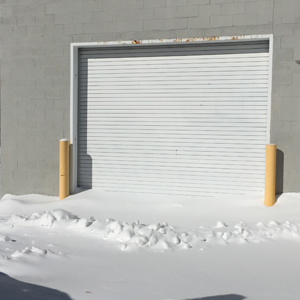 The elves in the Maintenance Department had the biggest morale boost due to the new high-performance doors installed.  Often they were called to fix or repair faulty doors – often with broken springs.  During their busy season in November/December, they could be replacing as many as 17 springs an hour!  When the previous overhead doors would break or malfunction, production would slow or stall.  Nobody got their candy cane break – and the elves were agitated. Nobody wanted a repeat of that this year. 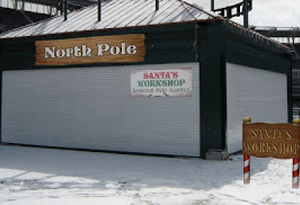 At the end of every December, the company faces a very tight delivery schedule. Beginning on December 24th and lasting for approximately 31 hours, around 326,168,661,521 deliveries are made from the factory. With the prime delivery vehicle traveling at around 650 miles per second and the very short delivery window, vehicle reloads must be as fast and efficient as possible. They realized there were many factors to consider when calculating the overall insulated garage door cost. With high performance rolling doors installed, the elves at Santa Claus, Inc. now have rapid opening overhead doors that open and close at 3 times the speed of standard coiling overhead doors. The increased overhead door speed allows them to get deliveries out faster - increasing production and reducing pressure on the workers. The faster door cycles also meant the garage doors closed sooner allowing less frigid air to infiltrate the building. This additionally contributed to not only higher elf morale but lower heating costs that help fund the 1st annual elf Aruba retreat, a highly anticipated trip planned in the offseason. 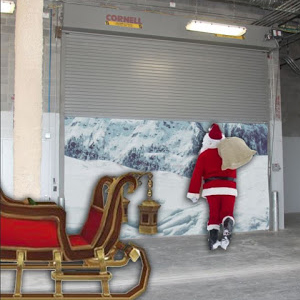 Although the entire Santa Claus Inc. company was extremely impressed with the highest energy efficient garage doors on the market as well as the low maintenance and the higher speed, they were additionally pleased with some of the high tech roll up door features. The smart operator meant anyone could easily open or close the door with a touch of a button, control limits and make many common door adjustments. With the length of the delivery vehicle being about 6 reindeer long, they had often run into issues that the old single eye beam would not account for the length of the vehicle. Additionally, some of the shorter elves from the dollhouse division complained that tops of their hat tassels did not trigger the door from closing, leading to possible accidents or injuries. With the new high-performance garage doors, advanced SaftyGard light curtains ensured that any object, person or reindeer that broke the designated six-foot light plane, would trigger the door to automatically reverse to the open position. This safety feature changed many tedious manual safety protocols such as having a red-nosed reindeer flash on and off when the door was closing. Finally, the added garage door insulation meant vastly increased sound reduction as many times reindeer games could get quite loud and rowdy outside, while nearby abominable snowman snow bowling could often create large distracting crashing noises. The new insulated roll up garage doors provided more than adequate sound protection from both. 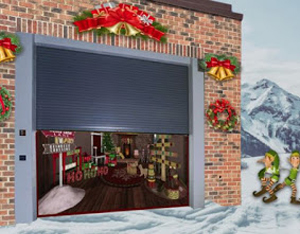 When looking at the complete insulated garage door cost associated with the high-performance garage doors, the team at Santa Claus Inc., not only considered the upfront cost, but the long term costs of maintaining the overhead doors, the energy and heating costs the doors would save, the increased production from higher speed overhead doors and the increased safety and security it would provide. This led them to purchase their roll up garage doors with energy efficient garage door insulation from Cornell. The high performance insulated garage doors provide the lowest cost per cycle and maximum return on investment available.