Rolling Doors and Security Grilles How Did it All Start? 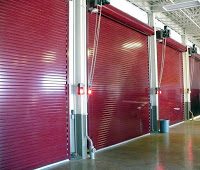 As a division of CornellCookson, Cornell Iron Works is a leading rolling door and grille manufacturer with facilities in Mountain Top, PA and Goodyear, AZ. The company produces rolling doors, fire doors, security grilles, overhead doors, roll up garage doors, insulated door, counter shutters, accordion folding partitions and other custom closure solutions found in stadiums, hospitals, hotels and museums. Whether it’s a rolling door or any of our other closure products, Cornell’s products can be found in a variety of facilities where reliability, security and life safety is vital. Cornell Iron is committed to providing high quality, domestically-manufactured solutions, and its brands have operated within the United States since 1828. Products are sold through a network of more than 700 dealer partners worldwide to ensure competitive pricing through equal and alternate brands.

The company originated back in 1828 producing ornamental ironwork when George Cornell and Samul B Althause took over Benjamin Birdsall's business and formed Cornell & Althause, premier manufacturers of plain and ornamental

The origins of our security grilles began in 1854 when J.B. Cornell patents a method of joining metal slats for revolving shutters for store windows. J.B. and W. W. Cornell would continue developing new innovative products we have become world known for when J.B. Cornell patented a metallic surface for fireproof partitions that would support plaster. This invention enabled the construction of high-rise fireproof buildings. This same year, the brothers added a foundry to their plant.

After the death of W.W., a new partnership between J.B. and his son J.M. is formed, becoming one of the largest manufacturing operations in New York City, employing 1,200 at its peak. It provided steel and iron work for the Product Exchange, probably the largest ironwork contract ever given in New York City, The Havemeyer Building, The US Trust Building, and over 13,000 tons of elevated railroad structure for New York and Brooklyn Stations. The firm provided circular stairs and ironwork for the Brooklyn Bridge and the iron base and stairways for the Statue of Liberty. It was the largest customer of the Carnegie Steel Company at the time.


The rolling door industry leader through the 1900’s

Throughout the 1900’s the company continued to expand and provide premier quality ironwork throughout New York City and beyond. As steel and pg iron production move west, the firm began to reduce its production of heavy iron for structural uses and focused on the rolling door business, which is the backbone of our production today. In 1911, J.M. Cornell forms a new company with his sons, Milton and John. Called Cornell Iron Works, it focused on the production of rolling door products.

In 1931, Cornell introduces the metal security grille or mall grille to the United States market. This replaces the wooden rolling grille which had become a staple in the industry. Through the thirties and forties Cornell produced wood sectional doors because steel was hard to afford during the depression and unavailable during the war. We discontinued this product line in 1952.

As production continued to increase, Cornell moved all production from its Long Island City plant to a newly built facility "out west" in Mountain Top, Pennsylvania in 1965.  As manufacturing outgrew the initial building, Cornell acquired the Oceana building across the street. With overhead door and security grille business still booming, Cornell opened a new 188,000 square-foot state-of-the-art production facility in Mountain Top, PA. The single location affords space for more efficient production methods, as well as room for future growth. The new facility is dedicated to M. Keen Cornell, president of Cornell from 1969 to 1997.

Rolling Door Innovations for the future

As they continue forge ahead as the industry leader in rolling doors, fire doors, security grilles, overhead doors, roll up garage doors, insulated door, counter shutters, accordion folding partitions and more, Cornell celebrated its 175th Anniversary in July of 2003, proving that whether they are seeking quality, performance, reliability or overall satisfaction, for 175 years customers have known that they can depend on Cornell. Later in 2003, Cornell earned an upgraded ISO 9001:2000 registration, continuing its demonstration of commitment to increasing company efficiency and to continuous process improvement from product design through manufacturing.